New Orleans Louisiana – is there a better place for a celebration of two months on the road! 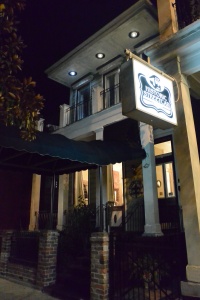 I stayed at a cute / quirky and affordable Historic Street Car Inn in the Garden District and just a St. Charles Car Line ride from the French Quarter. A perfect little place and pleasing to the budget for a two night stay in New Orleans and only $53 a night!

St. Louis Cemetery 1 was the first so the aged tombs I visited and the layouts of the cemeteries are truly worth a visit. I took in three different ones while doing a walking tour of the French Quarter and Garden District.   (St Louis Cemetery 1 and 2, and Lafayette Cemetery)

The Garden district was built-in the 1800’s and shows its charm and magnificence in the large “southern style” homes that are said to, “rival the architectural splendor and beauty of the French Quarter.”  Walking through the streets you see the charm, and I imaged rocking chairs on porches filled with smiling bodies drinking sweet ice-tea. The elegance of the homes hold a lavishness that could be appealing in horror movies – such was the case as I strolled by a Major Motion picture “Crone (Abattoir)” thought to myself…wonder if they need a girl riding a motorcycle for any scene but did not work up the guts to walk up to production and ask…but was a fun thought none the less.

The French Quarter – the original city has a draw to travelers, artists and writers and its spell is not lost on me. The charm that Mark Twain reportedly admired in the city is definitely apparent.  From Bourbon St. to St. Louis to Canal and  Decatur, I walked it all saw many sights in one day and when I left my hotel that morning I did not come back until almost 8pm! 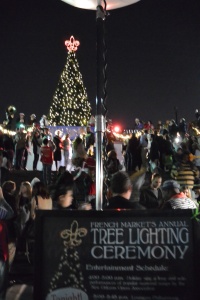 Jackson Square houses the oldest active “Catholic Church in America” – St. Louise Cathedral and is near where I would take in the tree lighting ceremony and concert. The 27 foot fleur-de-lis topped tree in Washington Artillery Park filled with free concerts and also got my characature drawn with the bike! Garlands, lights and hot coco…a second helping of beignets from Cafe Du Monde…yes please!